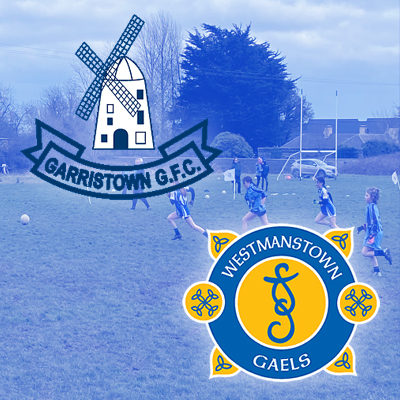 The U12 Girls football season kicked off with an away trip to Garristown on Saturday afternoon.

The pitch conditions were soft and heavy underfoot and influenced the style of play from the start.

Quick hands and heads-up kick passing by Garristown had the Gaels on the back foot for the opening few minutes. Garristown relied on a solid defence (and a sturdy upright) to keep the ball out of the net on three separate attacks. Much to the frustration of the Westmanstown forwards, Garristown managed to open the scoring with a point at the 6minute mark, followed quickly by a goal 3 mins later.

There was no dropping of shoulders, or stepping off the gas for this Westmanstown team.

The determination and resilience of these girls, that we’ve seen so much of in the few short years they’ve been playing, started to shine through, resulting in the girls opening their score sheet with a point from play after 10 minutes, and from then on Westmanstown were unrelenting in their pressure.

The wind was strong in north County Dublin but it was a Blue and White weather warning they needed when the Gaels came to visit.

To all on the sideline, it was obvious that something had clicked. They worked on setting a high tempo of play; Challenging every ball, side stepping and spinning out of the path of oncoming defenders, using the firmer ground on the wings to pick apart the Garristown back line. They worked the ball up the pitch in twos and threes, always giving their teammates an escape route, and tirelessly chasing down every stray ball.

The team were very grateful to the four U11s girls playing up for today's game, their valuable contribution was most appreciated. The younger girls displayed well-judged hand passing, accurate kicking and they read the game really well.

Everyone went home happy with their efforts, and a large portion of the Garristown pitch stuck to their kit.

Want to be a Referee? The GAA needs your help

Dear Members, Welcome back to the 2023 season. Membershi...

The 2022 Club Christmas Newsletter is available online no...

The three Gaelic Games Associations have today launched a...