Located in the Westmanstown Sports Complex, our club welcomes serving and retired members of An Garda Siochana, their families and the local communities of Lucan and Dublin 15.

We field teams at age grades from U8 to Adult in Football, Hurling and Camogie.  In addition, we run a weekly Club nursery introducing the enjoyment of Gaelic Games to local children aged 5 to 8 years.

Whether you are new to the area, or to Gaelic Games, you will receive a warm welcome at our Club.

For inform on membership, teams, facilities etc. please continue to read the information on our website pages.

If you are interested in finding out more about joining our Club please email: pro.garda.dublin@gaa.ie

Our Club Executive and key contacts can be found at the bottom of this page.

1930's In the later years of the decade the Club withdrew from competition as a result of reduced recruitment to the ranks.

1947 - The Club was re-established with many of the stars of the time serving Gardai in Dublin. Players like Brendan Lynch and Bill Carlos of Roscommon, Paddy Kennedy and Teddy O'Sullivan of Kerry and the great Tom Langan of Mayo.

1950's The Club remained strong, vying with St. Vincent's for supremacy in the capital. 30,000 spectators in Croke Park watched them draw with St. Vincent's in the 1952 final before losing the replay.  The club would also lose the 1955 final against the same opposition (played in 1956).

In the later years of the decade and early 60's the club once again declined where the absence of recruitment left a depleted and aging membership.

1965 - As the Club dropped divisions they were left with no option but to withdraw from competition.

1968 - After a number of years inactive, under the Chairmanship of Michael O'Connor and Secretary Jim Murphy (current Club President) both serving out of Pearce St. station, the Club was affilliated with the Dublin County Board again.

1970's There was some success in the early years winning both Divisions 2 and 3 and towards the end of the decade playing numbers saw a Junior team also being formed.

1986 - Having been relegated to Intermediate status in 1984 the Club won the Championship in 1986 and followed up with wins on all four of the divisions over subsequent years.

2004 - Westmanstown Gaels, the Juvenile section of the club and attracting the youth of the Lucan and Dublin 15 area, was set up under the Chairmanship of George Kyne.

2022 - Adult Hurling reintroduced and Adult Camogie introduced to coincide with club centenary and Garda Westmanstown Gaels achieving a player pathway for all members to remain playing at the club from aged 5 right through to adult level.

Since its formation in 2004 when the Garda GAA Club opened its doors to the local community, Westmanstown Gaels, as a community based organisation, open to all, has continued to promote Gaelic Games in our catchment area covering parts of North Lucan, Clonsilla, the new housing developments of Ongar and Hansfield and the greater Dublin 15 area.

Our Club currently has in excess of three hundred members boasting continued growth year on year. Members attend schools throughout the areas of Castleknock, Clonsilla, and Lucan with our Games Promotion Officer (GPO) Declan Jennings working closely with our catchment schools.

Each year we run club childrens' camps at Easter and Summer as well as being a host venue for Kelloggs Cul Camp, attracting some of the highest attendance figures in the Dublin area.

For a relatively young club we are making a progressive impact. 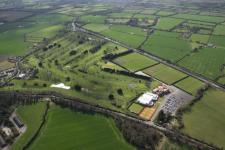